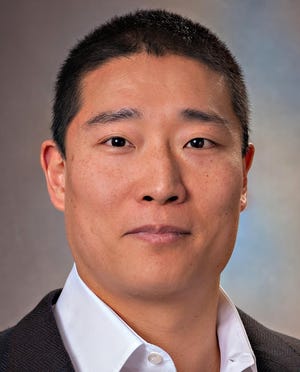 Carl Seon, M.D., can get out of bed on his own and slowly walk around his UPMC Presbyterian hospital room.

These are small, but important, steps as the 51-year-old UPMC Hamot physician recovers from a double-lung transplant after battling COVID-19.

“He is in the first stages of his recovery,” said Pablo Sanchez, M.D., UPMC’s chief of lung transplant and lung failure. “Dr. Seon is many, many times better now than he was before the transplant.”

Seon, an orthopedic surgeon at Hamot, needed the transplant after developing pulmonary fibrosis. It’s a rare complication of COVID-19 where the lung tissue becomes scarred and damaged.

He was diagnosed with COVID-19 in December. Seon’s condition worsened quickly and he had to be placed on a ventilator at Hamot before being transferred to Presbyterian in January.

“What happened is that he developed acute respiratory distress syndrome due to COVID,” said Sanchez, who performed the transplant. “When he arrived (at Presbyterian), he was a very sick man.”

Seon and his family have declined interview requests but have permitted Sanchez to discuss Seon’s recovery.

COVID-19 and its complications damaged Seon’s lungs to the extent that they couldn’t provide enough oxygen to his body after he recovered from the virus.

Sanchez performed the transplant on Feb. 25. Seon remained in the intensive care unit until Tuesday, when he felt well enough to be transferred to a nursing floor.

Over the next few days, doctors will evaluate Seon to see if he can move to a rehabilitation hospital.

“Once he’s there, our team will work on getting him ready for a more normal lifestyle,” Sanchez said. “Things like getting dressed on his own, showering, brushing his teeth, going up and downstairs.”

Seon must also learn to swallow again. He currently has a feeding tube but should start eating soft foods soon, Sanchez said.

His speech has improved in recent days as Seon uses a special valve over the tracheotomy opening in this throat.

“His attitude has been great, honestly,” Sanchez said. “He was already out of bed (Thursday) when I rounded at 7 a.m. He was asking me about his plan for the day.”

Patients who undergo double-lung transplants can make a full recovery, though it will likely take months, Sanchez said.

Seon will undergo hours of rehabilitation to improve his breathing capacity and endurance. He will see transplant physicians or their staffs every week after he is allowed to go home.