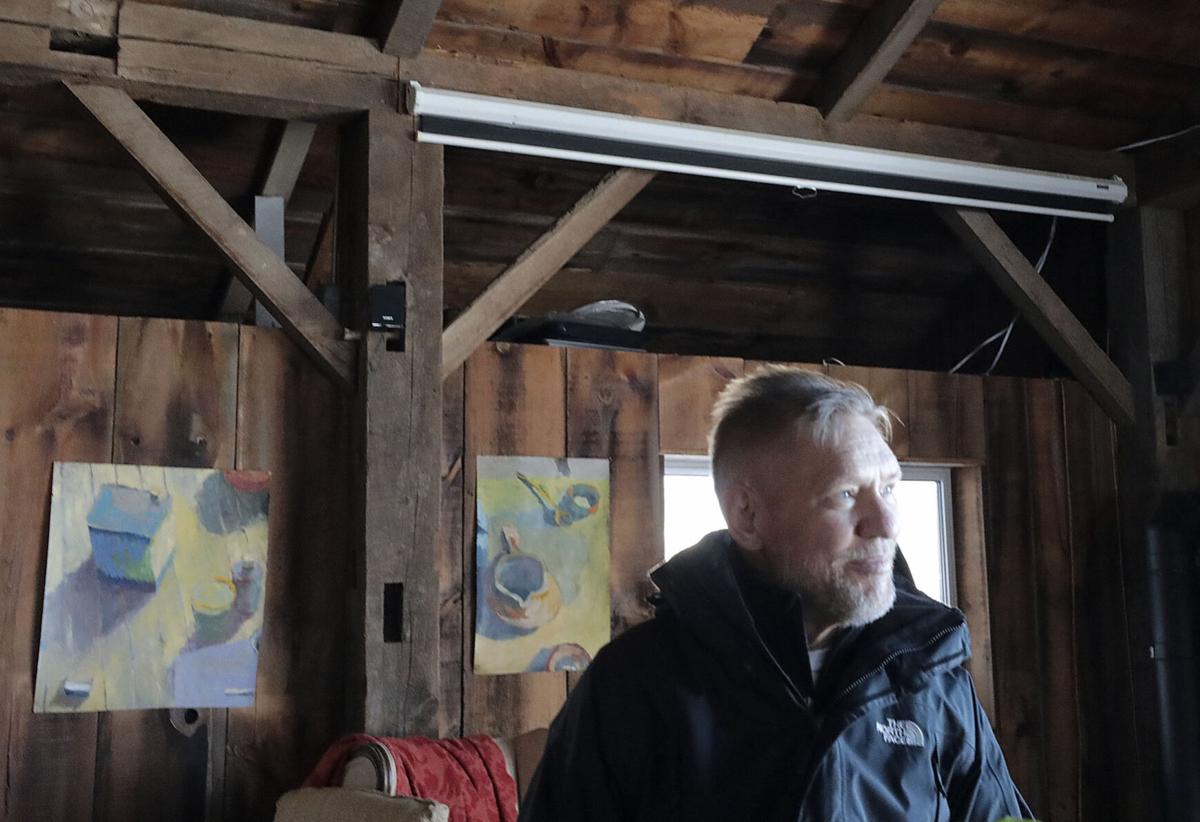 Dr. Matt Wolff became a cardiologist, treating heart disease, before learning he has a genetic heart condition that can cause people to die suddenly as his father did at age 50.

After spending years as UW Health’s chief of cardiology, replacing heart valves and doing angioplasties to clear blocked arteries, Wolff has undergone a major procedure himself: a heart-kidney transplant.

Wolff, 60, received a heart and a kidney from the same deceased donor at UW Hospital in October. He was one of five people to get the double transplant at UW last year, a record.

It’s a step he tried to avoid through diet, exercise, medications, implanted devices and research into his family history, which led to the discovery that his great-grandfather died from the heart condition at 40 in 1900. Other relatives, male and female, died from it in their 30s and 40s.

“I worked hard to not have to get a transplant, but there’s no escaping genetics,” Wolff said.

His heart problems led him to stop performing procedures in October 2019 and start working half-time seeing only clinic patients. But with his new heart and kidney, he’s back to hiking the Ice Age Trail near his home north of Cross Plains, where he grows organic vegetables. He hopes to return to work part time this spring.

“These organs are working perfectly, as best I can tell,” he said. “I’ve started thinking about all the things I’m going to do now that were out of the question before.”

When Wolff’s father died from heart failure and an abnormal heart rhythm in 1978, doctors told the family the condition wasn’t hereditary. Wolff was 18, a freshman at the College of Wooster south of Cleveland, not far from his hometown of Tiffin, Ohio.

He majored in biology and went to medical school at Johns Hopkins University in Baltimore.

During his residency at Johns Hopkins, at age 27, he decided to specialize in cardiology. He was intrigued by the heart’s complex blood flow and drawn to procedures that could make people better quickly. He wasn’t swayed by his dad’s fatal heart condition, at least not knowingly.

“If it was an influence, it was a subconscious influence,” he said.

Wolff was swimming in the Chesapeake Bay at age 29 when he felt an irregular, rapid heartbeat. He wondered if it was connected to his dad’s disease. “It did sort of light a little bulb in my brain,” he said.

In his early 30s, he had more irregular heartbeats, or atrial fibrillation. He read about a family with a genetic form of dilated cardiomyopathy, in which the heart muscle becomes weakened and enlarged, impeding blood flow and potentially causing heartbeats so irregular they can be fatal.

Soon, he was convinced he and family members who died young or developed heart problems had the same condition. He read his grandmother’s life story, which said her father died in 1900 from “dropsy,” an old-fashioned term for swelling from excess fluid. The condition, known today as edema, is frequently caused by heart disease.

Researchers in Boston tested Wolff’s family and four others, identifying a gene mutation that gives each child of an affected parent a 50% chance of having genetic dilated cardiomyopathy. The study traced the inheritance in Wolff’s family to his great-grandfather.

When the researchers reported their findings in 1999 in the New England Journal of Medicine, Wolff was listed as a co-author.

In the paper’s chart of family trees, squares and circles symbolizing people affected by the condition are shaded and those without it are blank. Wolff’s square is half-shaded — which he said he insisted on to the dismay of the lead authors — because he wasn’t convinced he had all the signs.

“It was great stubbornness on my part,” he said. “I wasn’t fully prepared to admit it at that point. Psychologically, this is a bit of a struggle.”

By the time the paper was published, Wolff had been at UW Health for nearly seven years. He became chief of cardiology before moving to UnityPoint Health-Meriter for a while and returning to UW.

His episodes of arrhythmia were rare but dangerous. “I had to lie on the floor, put my feet up on the chair, pull the telephone down by the cord and call somebody to get me,” he said, recalling one incident in his office at UW Hospital. “I was that close to death.”

He received a pacemaker to counter abnormal heart rhythms. The device was upgraded to an implantable defibrillator, which delivers corrective shocks when it senses life-threatening irregular rhythms.

Your membership makes our reporting possible.

He took numerous medications for his heart problems, including an experimental one he first tested in mice in his lab. The drug, developed by Array Biopharma, now part of Pfizer, is in a phase 3 clinical trial.

He exercised regularly, jogging and doing yoga. He and his wife, Kelly, a marketing executive at La Farge-based Organic Valley, ate mostly a heart-healthy Mediterranean diet using the vegetables grown in their sizable garden.

But by last summer, Wolff could no longer hold back ancestral fate. His weakened heart left him unable to garden or do yoga. “It got hard to walk up a flight of stairs,” he said.

The life-threatening abnormal heart rhythms started occurring more frequently, and drugs no longer helped. Neither did a procedure to burn some of his heart tissue to try to block errant electrical signals.

After being hospitalized Oct. 12, Wolff was put on the transplant list. As he waited, doctors inserted a balloon pump in his aorta to help his ailing heart keep pumping blood, a procedure he has performed on others.

“We weren’t sure we were going to be able to get him to transplant,” said Dr. Jason Smith, a UW Health heart transplant surgeon. “He was close to being as sick as you can get and still survive.”

Multiple-organ transplants are rare but increasing, with 289 heart-kidney transplants done nationwide last year, more than double the number from five years earlier and nearly five times the total from 2010.

Other transplant combinations include kidney-liver, kidney-pancreas and heart-lung. Each is relatively rare compared to single organ transplants.

It’s hard to access two suitable organs from the same donor, Smith said. Using organs from separate donors would make it more likely the recipient’s immune system would reject them. Medications used after transplant for one organ can be hard on the other, Smith said, and patients needing more than one organ tend to be sicker so the operations can be more risky.

“It took the field a long time to understand who are the right people to get it,” said Dr. Dixon Kaufman, director of the UW Health Transplant Center.

Wolff’s heart problems had caused his kidneys to fail, making him a double transplant candidate.

On Oct. 23, a heart and kidney became available from the same donor, and Wolff matched. Smith and his team transplanted the heart early the next morning, and then Kaufman and his team put in the kidney. Wolff was discharged on Nov. 3, Election Day.

Recovering from the transplant has given him a new outlook.

Previously, with his poor health and the significant upkeep on their property, he and Kelly thought they would need to downsize. Now, they plan to stay another five years.

Family trips with their three daughters, which had involved exploring Europe or hiking and rafting out West, had seemed impossible for Wolff to continue. Now, he hopes to join in again once the COVID-19 pandemic ends.

“I had pretty much stopped planning for the future,” Wolff said. “Now I’ve realized I’m going to be able to do all that.”

His daughters, ages 26 to 33, live in Portland, Oregon. They visited for two months after the transplant, following strict coronavirus prevention measures. He declined to say if any of them have the gene mutation for the heart condition.

Wolff has adjusted to seeing only clinic patients, missing the adrenaline rush of procedures but not being on call in the middle of the night. His transplant gave him more insight into the patient experience, he said, from taking difficult combinations of medications and filling out complicated forms to providers sometimes not showing up for appointments on time.

“There’s some inefficiencies in medical care that become more apparent when you’re on the receiving end,” Wolff said, adding that his care was excellent overall.

He doesn’t know anything about his organ donor, including the person’s gender or age. But he understands the events that transpired, as they do for any deceased donor transplant. Someone had to die — likely suddenly and unexpectedly, with a grieving family — in order for him to stay alive.

In a letter this month to the donor’s family, Wolff expressed sorrow for their loss and appreciation for his gift of life.

“Your kindness, selflessness, and generosity in the setting of what I imagine was terrible and unexpected grief is inspiring,” he wrote.

His transplant is a gift, he wrote, “that I will remain grateful of every day, one that I will work to my utmost to deserve, and one I will try to pay forward.”

Get local news delivered to your inbox!