Covid-19 left a first grader from Allen Elementary School in need of a heart and liver transplant.

Zoé Zubiate, 7, has been at St. Louis Children’s Hospital with her parents Carlos Zubiate and Christina Trillo for the past two months as they wait for the transplants. She was first connected to an ECMO (Extracorporeal membrane oxygenation) machine and is currently relying on a Berlin Heart, a pump that does the work of her heart and lungs, while she waits.

Zoé was born with a propionic acidemia, a rare inherited disorder that makes her body unable to properly process certain parts of proteins and fats, according to her mother. Although she wasn’t diagnosed with the disorder until she was nine months old, her family was able to manage her condition with a careful diet for most of her life, Christina said.

In the past year, Zoé began to decline rapidly, her mother said. Because her liver can’t properly process protein, it gives off toxins that have damaged her heart, causing a condition called dilated cardiomyopathy, she said.

Last fall, Zoé was in the hospital awaiting a heart transplant, but her medical team was able to get her condition under control with medication and she was allowed to go home to wait for a transplant, Christina said. At that point, doctors thought that medication could control Zoé’s condition for months or possibly even years, she said.

But then in early November, just 15 days after leaving the hospital, Zoé became infected with covid-19. The virus made Zoé very sick, especially impacting her lungs, which made her heart condition critical, her mother said.

Zoé’s doctors were initially able to use an ECMO machine to do the work of her heart and lungs, but she was unable to move around, and had to be sedated and be given lots of medication, Christina said. In December, Zoé underwent an open-heart procedure to switch her to the Berlin Heart pump, which attaches to blood vessels in her abdomen and allows her to move around and even get up and walk twice a day, her mother said.

Zoé’s condition has improved with the new pump and she calls the machine her “heart helper,” Christina said.

This week, Zoé’s family received the news that she will be eligible to receive a heart and liver transplant at the same time so she will be able to have one big surgery rather than two separate procedures.

While Zoé’s medical costs are covered, her parents still face expenses related to travel such as taking off work for the past two months to stay with her in the hospital, according to Christina’s cousin, Norma Tarin.

The family appreciates the gifts and cards they have received from the community as well as financial support, Christina said. Allen Elementary School has also been very supportive of Zoé, allowing her to attend school online, she said.

Christina and her husband Carlos also have two other daughters, who are staying with their grandparents, and Zoé is especially missing her sisters, she said.

Christina hopes Zoé’s story encourages people to wear a mask to protect the most vulnerable and sick people in the community, she said. 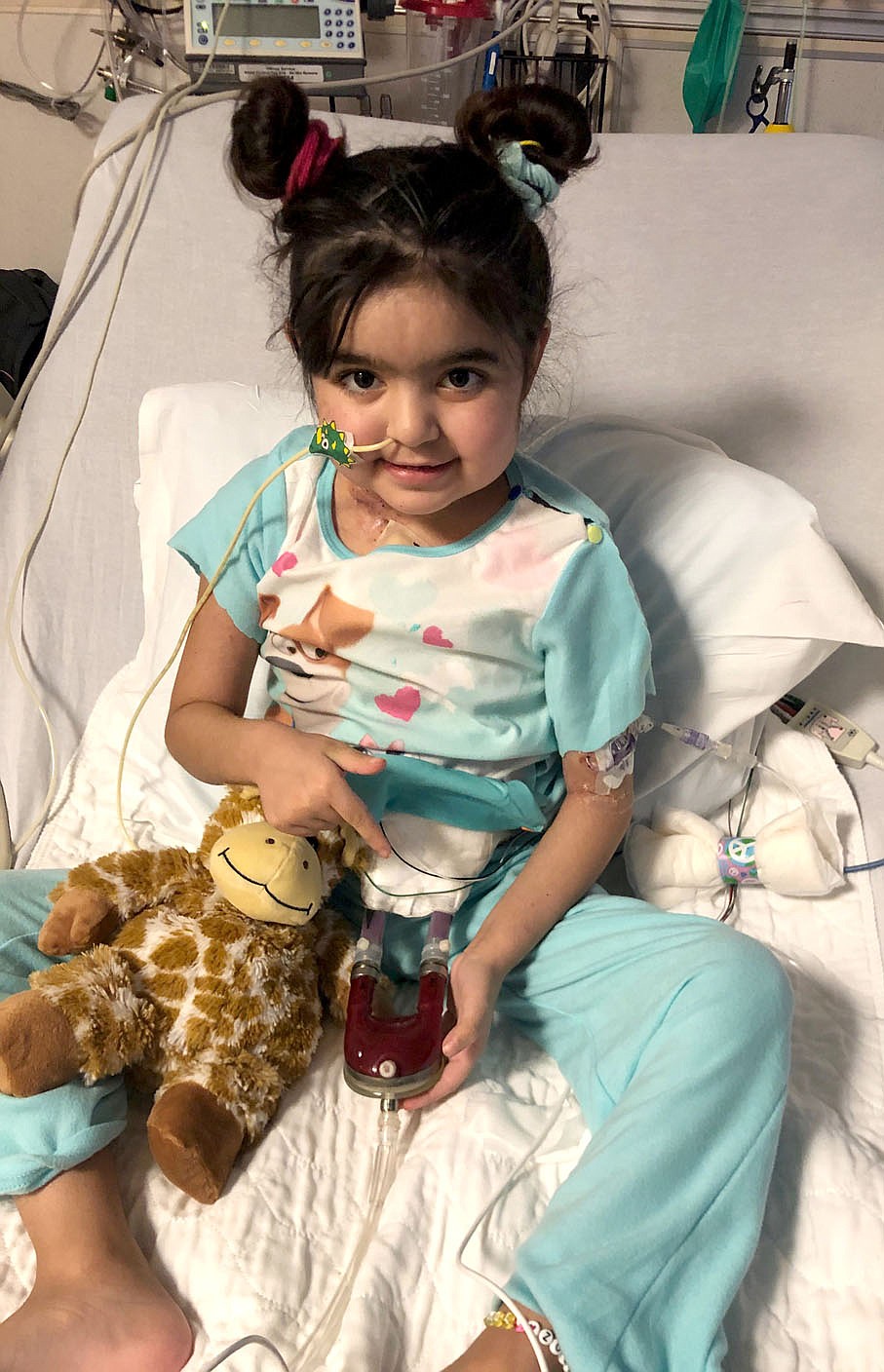 Photo submitted
Zoé Zubiate holds a part of the Berlin Heart pump that is doing the work of her heart and lungs while she waits for a heart and liver transplant at St. Louis Children’s Hospital. 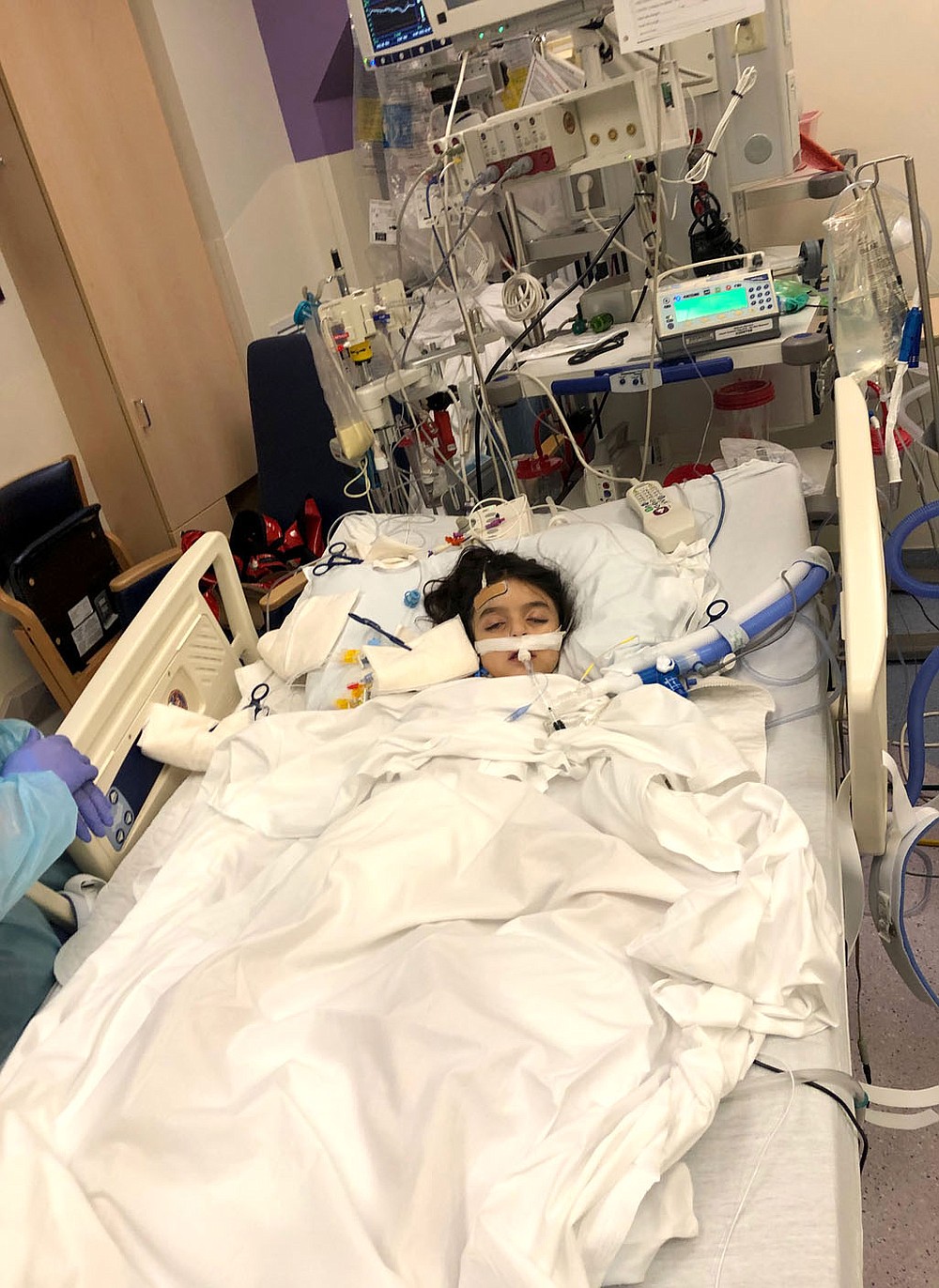 Photo submitted
Covid-19 left Zoé Zubiate, 7, in need of a heart and liver transplant. She was initially connected to an ECMO (Extracorporeal membrane oxygenation) machine to do the work of her heart and lungs.